There are three main species of worm that can cause problems in your flock:

These are large white worms found in the small intestines. In small numbers these are fairly harmless. However, once the numbers start to increase birds will start to scour, have anaemia, struggle to digest feed effectively, lose weight and cause the number of eggs and the egg quality to drop. In severe cases, these worms may cause an intestinal blockage.

These are small hair like worms that are found in the blind ended sacs known as caeca. They are mainly an issue as they are known to carry a protozoa known as Histomonas Meleagridis which can cause the disease ‘blackhead’.

These are small, thin barely visible worms that inhabit the crop and intestines. They burrow into the walls and cause inflammation of the infected area. Severe burdens can lead to death.

This disease is usually a disease of younger birds as older birds develop immunity to it. It is not caused by a worm but by a protozoa known as coccidia.

Birds will appear hunched with ruffled feathers, be scouring, lose weight and in some cases become anaemic. Droppings may also contain red mucus.

Different species of Coccidia are species specific and even within those species will only affect certain areas of the gut. It damages the intestinal walls causing inflammation, cell damage and in some cases bleeding.

The most common types of Coccidia are:

How is best to manage worms and coccidiosis in my birds?

In older birds, we recommend performing a worm egg count every two to three months to check worm egg levels. Usually if any Heterakis or Capillaria eggs are detected we recommend worming with a licensed product such as Flubenvet (flubendazole). Herbal products have limited use and there is little evidence that they can provide a benefit in clinical cases of worms.

In younger birds it is important to monitor for coccidiosis. We also recommend performing a coccidial oocyst count if birds are beginning to show symptoms. There are many different treatments available for coccidiosis. Discussion with your vet would be advised. 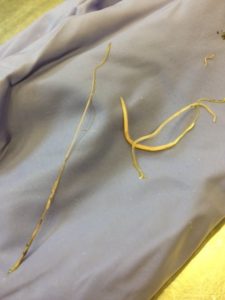 There are many species of ectoparasite that can be found on poultry. Below are some of the more important species than can cause disease. They can be divided into two groups:

These mites are the most common ectoparasite of poultry in the world and have a massive economic impact on the commercial chicken industry. They feed during the night and spend about 30-60 minutes on the host at any one time. Otherwise they can be found in dark places such as under perching and in cracks in the coop. Reportedly, red mites can survive without feeding for up to nine months. This can make them very difficult to eliminate from your flock and housing. Like many parasites, they can also be a carrier of many viral and bacterial diseases such as Newcastle disease and Salmonella. These mites are very small and can appear black or red. They have been known to bite humans and may cause an itchy rash or allergic reaction. 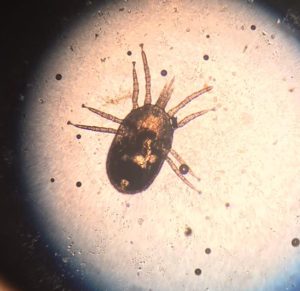 Symptoms in the bird.

Also known as the American louse because of its strong presence in North America in many domestic and wild birds. However, it is also found in Europe. Its appearance is almost identical to red mite but it lives its entire lifecycle on the bird and cannot survive for extended periods of time in the environment. The mites can be easily seen by parting the feathers around the vent region. The skin in that area may also be cracked with scabs. Young birds tend to be more susceptible.

There are more than 40 different species of lice: the most common include the body louse, the shaft louse and the head louse. More than one species can be present on the bird at one time. The entire life cycle of a louse takes place on the host and transmission between birds occurs via direct contact with another infected bird.  Female lice can lay a significant number of eggs over a very short period, which can be seen on the base of feathers by naked eye. They mainly feed on skin fragments and feather debris. Lice infestation appears to be worse in the autumn and winter.

Otherwise known as ‘Knemidocoptes mutans’. This mite is microscopic and burrows between the leg scales of chickens.

Otherwise known as ‘pododermatitis’. This condition occurs when the environment that the birds are in is suboptimal; Wet bedding, stony environments (that may cause abrasions) or wire. This may mean the footpad is under too much pressure and sores develop.

This is a very painful condition and will be visible initially as lameness in your hens. It comes in varying severity and may require surgical intervention and antibiotics in severe or long-term cases.

If your bird is struggling with bumblefoot, first clean the wound with an appropriate antiseptic wash such as hibiscrub or salt water. Bandaging with a soft foam ring covered by cotton wool and vet wrap will help it to heal more quickly as it will take the pressure off the foot pad (see the diagram below). The foot should be flat so that weight can distribute evenly between all four toes.

This should be changed every couple of days and not allowed to become wet. 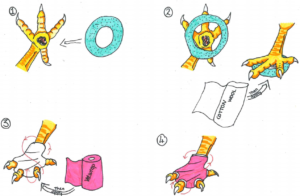 It is also important to address the causes of bumblefoot:

What is safe to eat? 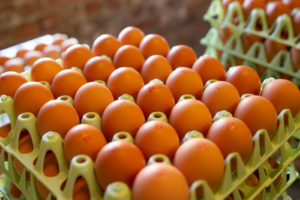 The egg can tell us a lot about the health and nutritional status of a hen. In the backyard flock there are often questions over what is safe to eat or not.

Diseases such as infectious bronchitis, aMPv and mycoplasma  (which all cause snicking, head shaking, nasal discharge), Newcastle disease (see notifiable diseases) and egg drop syndrome (a decrease in egg production caused by adenovirus) may also cause some of the egg abnormalities below.

If any bird begins to produce an abnormal egg on multiple occasions, seek the advice of your vet. Otherwise you may use this guide:

Zoonoses – Diseases of Both Humans and Animals